Artistic ‘lingo’ is one of the things people less familiar with art find most off-putting, but really you only need to know a few definitions for your understanding and appreciation of art to dramatically increase.  For those of us already ‘in the know’, we all have little blank moments when we loose the word, and fetching the Honour & Fleming seems a bit too much effort.  So I’m starting a new series of definition posts.  The definitions won’t be chosen in any particular order (they are not alphabetical), but will broadly be on the same theme.  Today’s are Tempera, Oil Painting, and Fresco, three ways of binding pigment and applying them to a surface.

Tempera:  Paint made from using egg yolk to bind pigments.  Comes from ‘tempered’, meaning made workable.  The pigments were usually powder, and made from an organic substance (the most expensive being lapis lazuli, a brilliant blue stone mined in Afghanistan, used widely in depictions of the Virgin Mary throughout Medieval and Renaissance art).  Tempera was used widely in Medieval art, from Gothic through to early Renaissance, until it began to be overtaken by oil painting in the 16th century. 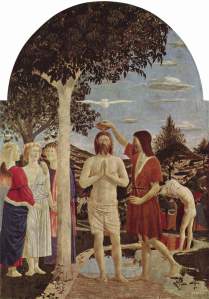 Oil Paint: As the name would suggest, this is paint made through combining pigments with oils, usually linseed.  This would slowly dry and become hard.  It began to take over from tempera as the main paint of choice in the 16th century, having been developed by painters in Flanders and Italy in the 15th century.  It was applied over a plain ground colour onto canvas or panel, and unlike tempera, continues to be a popular choice of paint for contemporary artists (Gerhard Richter, for instance, uses oil paints for his abstract pieces). 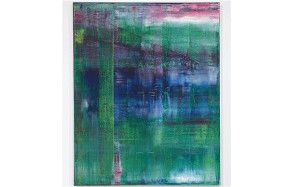 Fresco: Comes from the Latin word for ‘fresh’, this is paint applied to wet plaster on a wall surface.  The pigments are mixed with water, and then applied to fresh lime plaster.  The water of the paint combines with that of the plaster, resulting in long lasting colour.  This was a dominant technique throughout Medieval art and the Renaissance, notable are works such as Massacio’s work in the Brancacci chapel, and Paolo Uccello.    It’s counterpart is ‘a secco’, the application of pigments onto dried plaster, achieving an understandably less reliable result.  Fresco painting was not particularly popular in Flanders and North of the Alps in general; the damp climate (unlike Italy’s warm, dry one) in these regions does not favour working in plaster, so oil took prominence here. 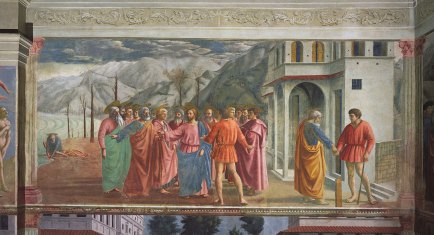