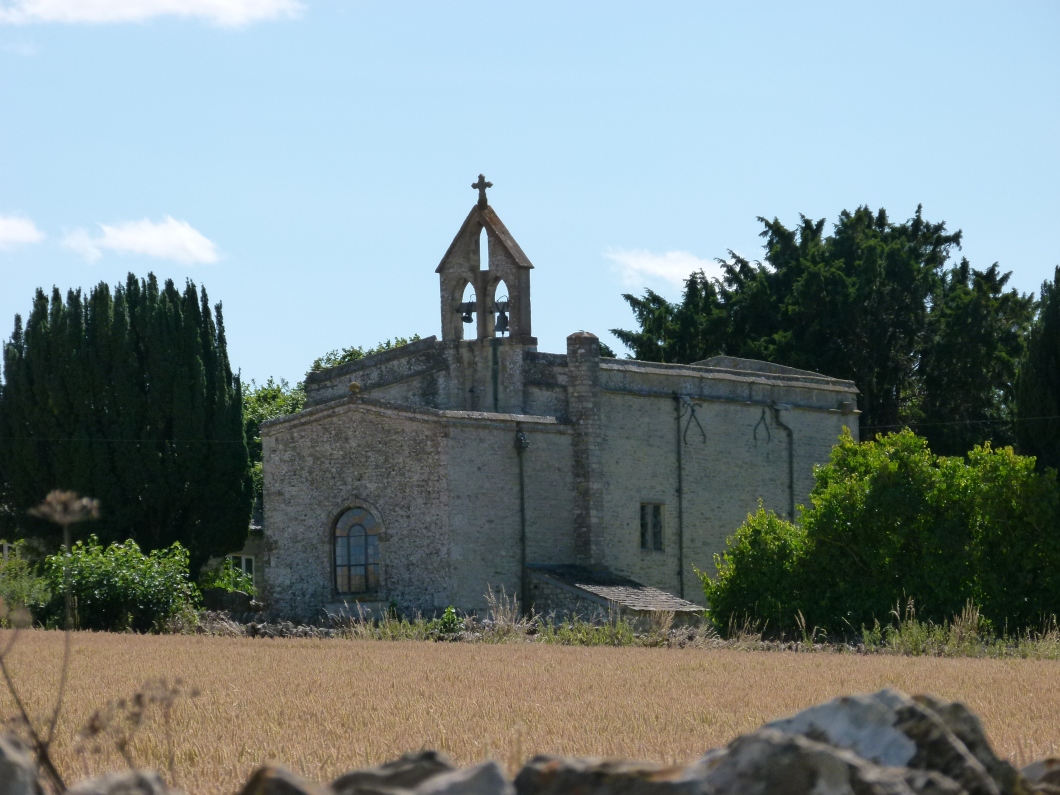 This fascinating little church makes for an ideal excursion for anyone wanting to escape the Oxford bubble, or simply just explore the beautiful countryside around Oxford.  The tiny hamlet of Shorthampton is easily accessible by road, but perhaps the most pleasing approach is by foot, walking through the beautiful hills and shallow valleys of the surrounding landscape.  We took a train out from Oxford to Charlbury, a pretty little village not far from the city.  From there, you walk out to Shorthampton along footpaths through the fields, with some beautiful views across the Cotswolds and back down into the village.  The fields themselves tell you something of the place’s history, with medieval ridge and furrow visible around Shorthampton.  Shorthampton itself seems now to be little more than a farm and a small collection of houses, with the church’s bellcote prominently rising above the surrounding trees.

It is clear from the outside that the church has been built in several phases.  There seems to have been a chapel on the site since at least the twelfth century, with the first surviving reference to it found in a document dating from 1296.  However the majority of what we now see dates from the fourteenth and fifteenth centuries.  The fourteenth century saw the addition of a new chancel, and the fifteenth century brought about radical changes to the structure.  A new nave altar was added, necessitating the expansion of the church, which was achieved by pushing the south wall of the nave out by about six feet, to the position it is now in.  The roof was, obviously, also altered in this period, with the current arch-braced roof being added.  It’s corbel stone supports are carved with human heads (not so easy to spot in their white-washes state), three representing lay people, and one representing a monk, suggestive of the church’s link with nearby Eynsham Abbey, which owned the land at that time.  There is also a stone representing a priest – the set perhaps together representing the figures of the people who would have occupied the church.  The chancel stuck on the front of the church slightly oddly, dates from 1820-24, as do the porch and bellcote, which were all rebuilt in this period.  The church is enclosed by a drystone wall, in a very pleasing churchyard with commanding views across the Cotswolds.  Its quaint and rural character is only reinforced by the adjoining orchard.

The overall impression from the outside if of an interesting but not particularly beautiful church; endearing rather than especially picturesque.  Remnants of the earlier building phases can be seen throughout, such as the rounded windows in the north wall.  However the interior is both beautiful and intriguing.  The most striking features are the numerous wall-paintings, some of them unfortunately in a very sorry state, but fascinating nonetheless. 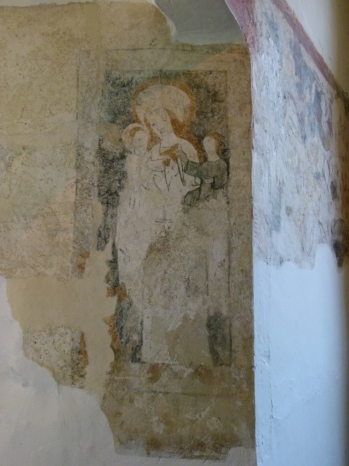 The squint is painted with the Legend of the Clay birds, a story in the young Christ molds himself some birds out of clay, and then turns them into real birds which fly off.  This is an apocryphal story, derived not from the Bible but from various collections of stories about Christ’s childhood, found in the Gospel of St Thomas.  Having studied these stories for my undergraduate thesis, I was delighted to find an image on this scale so close to home.  They are evidence of people’s strong desire to know more about Jesus as a person.  The Bible has very little to say about Jesus’ upbringing, so people turned to these unofficial stories to fill in the blanks, as typical of the general turn in this period to focusing on Christ’s humanity.

The paintings above the nave altar also reveal an interest in Jesus’ human side.  There are two phases of painting here, the later depicting a fairly standard Christ in Majesty, but the earlier seemingly depicting the Agony in the Garden, complete with great red tears of blood, an image which again draws attention to Christ’s humanity, presenting a particularly empathetic image of him.  The Christocentric paintings are completed by the Doom painting over the chancel, showing us Christ’s promise of salvation at the day of Judgement.

The other paintings largely depict various saints, some of whom have local significance.  The local saint Frideswide of Oxford, whose relics are housed in Oxford Cathedral (within Christ Church), and who caused a spring to appear at nearby Binsey (see a forthcoming blog post), is depicted on the north wall.  This same wall features an image of an archbishop, who is likely to be St Edmund of Abingdon. He became one of the first academics at the fledgling University of Oxford, and was later, reluctantly, elected Archbishop of Canterbury. 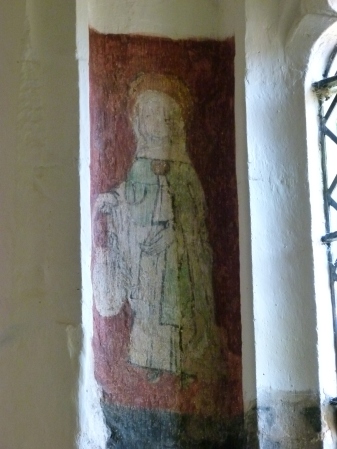 St Sitha, or Zita, a thirteenth century saint known for her piety whilst in domestic service, is featured in the reveal of the south window.  To the east of the door is an image of St Loy, or Eligius, a goldsmith turned bishop.  He was patron saint of all metalworkers, including blacksmiths, hence his being depicting shoeing a horse.  The scheme of the west wall seems to have been either St George and the Dragon, or the Archangel Michael fighting the Beast of Revelation, but its current damaged state makes it hard to be certain of the subject.  The saints depicted are for the most part of a quietly pragmatic and humble piety, perhaps chosen as appropriate role models for the congregation of this rural church.

But the wall-paintings are far from the only interesting elements inside the church.  The space itself is dominated by the box pews, added along with the pulpit and reading desk in the 1820-24 works, but possibly replacing similar pews from the late-sixteenth or early-seventeenth century, as suggested by the cuttings in the stonework of 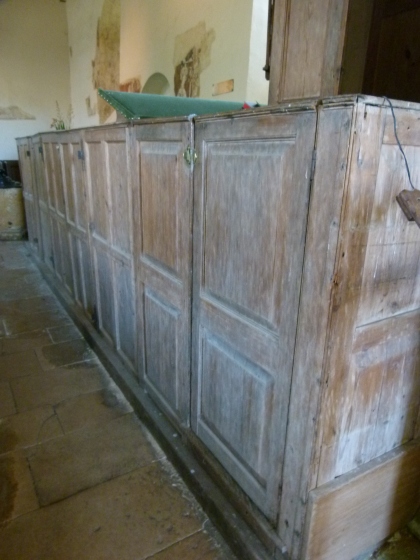 the mould of the chancel arch and the piscine.  There was also at some point a west gallery, probably surviving until at least 1810, and which made use of the original twelfth century door, re-positioning it to give access to the gallery.  Another major original survival is the tub font, which sits opposite the entrance like a cut-off Doric column, doubtless offering a rather intimidating sight to the small babies brought to it for baptism. 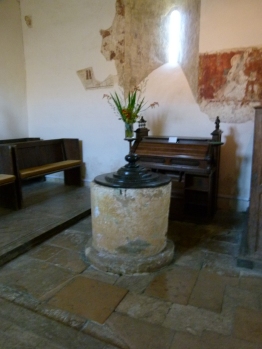 The fifteenth-century elements, mainly the paintings, have not survived so well.  The theological changes brought about by the Reformation lead to the white-washing of the paintings, which were only rediscovered in 1903.  However, instruction were to add texts in their place, hence that which we see over the door, the Creed.  The preference for text continued, as seen in the late seventeenth or early eighteenth century cartouche on the west wall, which contains King Solomon’s prayer at the consecration of the Temple in Jerusalem.

The nineteenth century chancel, far from clashing with the earlier building as such additions often do, allies itself with the church’s quiet simplicity.  Its best feature is the window over the altar, offering a wonderfully peaceful view out across the fields and countryside. 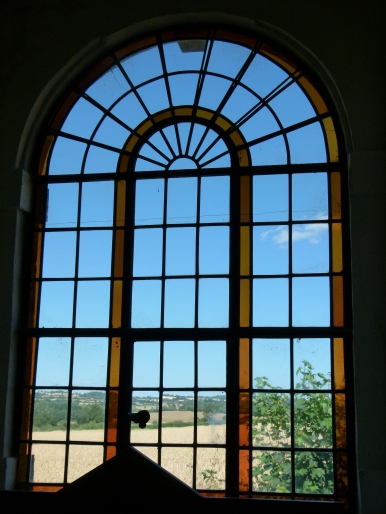 It is an altogether charming church, with an overwhelmingly peaceful atmosphere.  There is a real sense of continuity, with the people farming and praying amongst this beautiful landscape for hundreds of years, and this gives the whole place a very reassuring feel.  I always say (because I always feel!) the churches I write about are well worth visiting, but I would particularly recommend Shorthampton if you’re in search of a quiet moment, to put anxious thoughts to rest, or just need a break from the buzz of the city.  I suppose that, of all the churches I have visited, this is the church in which I felt I could come closest to their original purpose.  You can certainly still feel why, all those centuries ago, this spot was chosen for the location of a simple, one-man chapel, and how it has grown and developed with the passing lives of the people who lived, worked, and died, in the surrounding countryside.