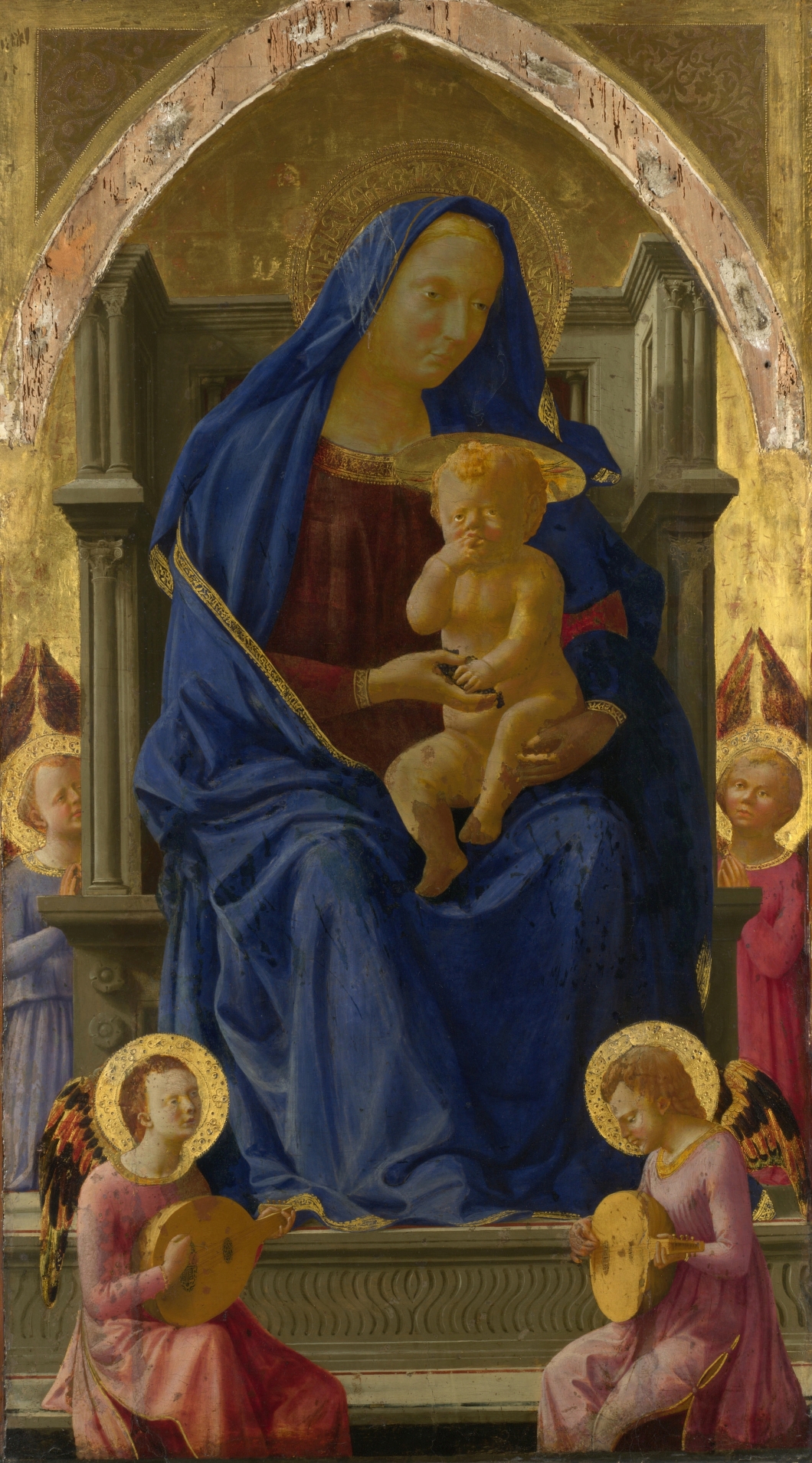 Masaccio’s most famous works are undoubtedly those found in the Brancacci Chapel, in the church of Santa Maria del Carmine, in Florence, and his Holy Trinity, found in the church of Santa Maria Novella, also in Florence.  Alongside The Holy Trinity, The Tribute Money, and The Expulsion, have become poster-works for the Italian Renaissance, endlessly discussed (or at least cited), and burned into the memory of anyone who has studied European art history.  But for those who can’t make it all the way to Florence, London too holds Masaccio-based delights, in the form of the subject of today’s post, Masaccio’s The Virgin and Child, of 1426.

The large painting (it measures an impressive 135 x 74 cm), would originally have functioned as the central part of an altarpiece.  Commissioned for the Chapel of Santa Maria del Carmine, in Pisa, by the Pisan notary Ser Giuliano degli Scarsi, the painting explores the desire to make the Mother and Child both supernatural, and real, human.  This leads to a mix of elements that may seem something at odds with one another to the modern viewer, but which express this central Christian belief in the humanity of the Virgin and Child.  The figures are on a monumental scale, far larger than the instrument playing and singing angels who surround them.  This presents a hierarchy of importance, the larger figures of the Virgin and Child present their far high status.  This scale is emphasised by the composition of the painting, with the Virgin and Child raised above us on a throne, making us look up at them reverentially, something that would have been further highlighted by its being mounted in the altarpiece.  The use of a gilded background also creates a sense of them being in a special, removed space.  There is no attempt to position the throne and its support in a realistically represented space, which may seem to create an odd contrast with the cleverly articulated and perspectivally treated architecture of the throne itself.

However, Masaccio cleverly contrasts these ‘unrealistic’ elements with more naturalistic modes of representation.  One aspect of this is his interest in perspective and lighting.  The painting has a central vanishing point, with the other elements in the painting arranged according to this single- viewpoint perspective.  He has even attempted to present Christ’s halo, a supernatural aspect the nature of which was cause of some debate, in a foreshortened fashion, to accord with this sense of perspective.  He uses a strong sense of directional light to model the figures, and draw attention to the gentle folds of the Virgin’s mantle and dress.  His understanding of how to use this light is demonstrated by the fact that the shadows are consistent with the direction of the light.  The impressive foreshortening of the instruments of the front two angels gives the painting a clearly defined sense of depth, a 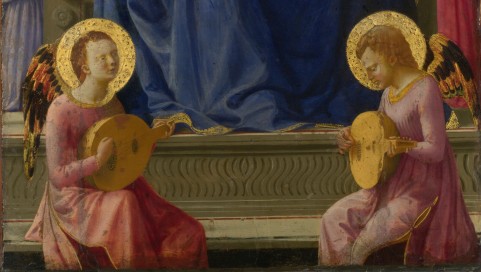 nd again adds to the sense of reverence, placing the Virgin and Child just beyond our reach.  The architectural elements such as the throne both follow the perspective, and offer a sense of realistic familiarity.  The use of Corinthian and composite capitals recreates recognisable architectural details from the city of Pisa itself, giving the viewers a sense that the Virgin and Child are somehow in an Italian setting.

This sense of appealing to the everyday experiences of the painting’s viewers is also carried through to the realistic treatment of the figures themselves.  Rather than remaining distant, aloof, or sombre, Masaccio’s Virgin and Christ appear as a real mother and child.  Christ, often depicted in Virgin and Child images as blessing, or with a general sense of awareness of his own divine nature, here clutches at the grapes offered him by his mother, and sucks at his fingers (those usually used for blessing), just like a real child.  While he is rather large, his plump body and tousled hair recall the features of real babies.  This is mirrored by his mother, who carefully cups her hand around him to hold him on her lap, and gently offered his the fruit.  But, with the serene but perhaps slightly sad expression, we are shown that she understands the significance of her infant child.  We are led to contemplate the undeniable humanity of Christ, an aid to the contemplative religious meditation of the viewer.  This awareness of his human nature only serves to make his later self-sacrifice and the events of the Passi0n all the more profound and moving.  This human aspect of Christ was increasingly emphasised in religious movements of this period, in the preaching of the Mendicant friars for instance, and in the growth of confraternities, and in the numerous festivals and ceremonies commemorating the Passion across Italy.  The angels in this painting almost act as stand-ins for the viewers, they are highly individualized, with different hairstyles for example, and their facial expressions emphasise their individual responses to their religious experiences.  They are much like the human worshippers gathered before the altarpiece itself.

This level of human signification is used in tandem, and in some senses responds to, a layer of symbolic meaning.  The most obviously symbolic element in the painting is the bunch of grapes.  This symbolically recalls the wine of the Eucharist, and thus Christ’s blood, and the Passion itself.  This is particularly touching given the childlike behaviour of

the Infant, it brings a sense of dramatic irony to the painting, with the viewing seeing the baby foreshadowing the sacrifice of the adult.  The emphasis placed on Christ’s fingers, particularly those he playfully chews or sucks, brings to mind the blessing gesture, and with it Christ’s teaching and works prior to the Passion.  Thus the child prefigures or foreshadows the life and works of the grown Christ.  The words of Mary’s halo are from the Ave Maria, the Hail Mary hymn, thus emphasising the Virgin’s spiritual significance, and connecting her with this image of Christ.  Not only is she pictured as the mother of Christ, but the reference to this hymn highlights her intercessional role – the painting’s viewers would be reminded to pray to her to intervene on their behalf in the Court of Heaven.  This was one of the main reasons the Cult of the Virgin became so popular, because Mary was thought to have this intercessional power, potentially reducing the time the individual human soul would have to spend in Purgatory, so it is interesting to see how Masaccio has linked these two developing religious tendencies, the humanity of Christ, and the power of the Virgin.  To further highlight the Virgin’s importance, Masaccio has used the by then accepted move of using rich blue, made from lapis lazuli, for her mantle.  This stone, found in Afghanistan, was hugely expensive, due to its relative rarity and the distance it had to travel, so came to be seen as the appropriate colour for a figure of such high spiritual significance as the Virgin Mary.

So we see in this painting Masaccio bringing together many different elements and contemporary concerns and religious ideas of the society he lived in, tapping into deeply help religious beliefs as well as exploiting new artistic techniques, and tying them together to create a work which appeals to both the human, and the spiritual, in its viewers.

There is an interesting side story to this painting.  The payments for it were collected on Masaccio’s behalf by none other than Donatello.  He was also working in Pisa at the time, and was friends with Masaccio.  It is interesting to be reminded of the extent to which artists were friends, new one another, and even collaborated.  It can be tempting to be drawn into the post-Romantic idea of the artist as lone genius, and it is refreshing to be reminded that artistic networks were more fertile, active, and indeed frequent, than we might now imagine.

The National Gallery’s entry on the painting can be found here.