Over-exposure to this painting as a sixth-former had left me feeling it was at worse dull and a best that there wasn’t much left to say about it.  It seemed to be a painting you could analyse with a check-list: classical references, punning reference to family name (the wasps are a possible reference to the Vespucci family, potential patrons of the work), marital context.  It was only when I was unexpectedly re-introduced to the painting at university that I recaptured a sense of real excitement about this painting.  It now stands as one of my favourite paintings in the National Gallery, an amusing and subtle exploration not only of classical references and intellect, but also of human relations and social expectations.

Painted in egg-tempera and oil on a panel of poplar wood, it is thought to have probably served as part of a piece of furniture in a bedroom, possible of a newly married couple.  Though the mostly likely item of furniture used to be identified as a cassone, the chest which held the bride’s trousseau, it is now thought that the painting most likely formed part of a back-rest or spalliera.  This may have been part of a cassapanca, a sort of chest-bench, which could function as a cassone, or it could have been part of a daybed.  We mustn’t allow our modern assumptions to creep in here – bedrooms were in this period by no means entirely private spaces, and might be used as much as socialising spaces during the day.  So we can assume that thought it was placed in a bedroom, the painting’s audience was by no means limited to the occupants of the bed itself.

The story the painting is linked to originates in Homer, that of the illicit affair of Venus and Mars (in Homer they are of course Aphrodite and Ares).  Venus, married to the under-appreciated Vulcan, engages in an affair with Mars, the god of War, before they are caught, in the act, by a net crafted by Vulcan.  In Homer’s telling they are subjected to the humiliation of being laughed at by the other gods.  Though the story certainly doesn’t appeal to the modern sense of humour, and seems rather ominous for a bedroom painting, the central sort of the affair of Venus and Mars took on other connotations.  The emphasis on the ability of Love to subdue War, and thus bring about peace, has often been focused on as a positive interpretation of the story.

Botticelli seems to have been keen to cram in as many classical references as possible, on top of the subject matter itself.  The choice of the satyrs playing in the background may be a reference to a lost work described by the second-century Greek writer Lucan, which depicted the Marriage of Alexander and Roxana, while cupids played with Alexander’s armour.  This demonstrates both Botticelli’s classical knowledge, and puts him on a par with the much admired ancient artists.  Venus’ pose may reference an extant classical work of art, the Roman Hermaphrodite sculpture, which was very popular in Florence in the fifteenth century, and was widely copied.  This sculpture, male when viewed from one side, female from the other, has a similarly reclining pose, and Venus’ foot in particular seems to reference the pose of the sculpture.  However, despite these classical references, there is not a great deal of classical influence in the style of the painting itself.  The costumes are contemporary to the time of the painting, they are not archaicising, but would have been recognisably modern to the painting’s audience.  Venus’ hair is also like that in many other contemporary portraits.  So there in fact seems to be an attempt to position the ancient story in a modern context.

This seems to be related to the moral or implications of the story.  As we have seen, it has been interpreted in a positive light, as representing the triumph of peace or love over War.  However, the painting may also carry more sinister connotations.  A slightly risqué interpretation is that it depicts Mars’s ‘little death’, the post-coital state, implied not only by the fact that he is asleep, but by the fact that even the blast from the conch shell cannot awaken him. This mischievous and someone tongue-in-cheek depiction can be seen as an amusing talking (or perhaps not talking) point.  It might also be interpreted however as carrying a more serious message.  It acts as a warning to the painting’s male audience.  Mars has been so seduced, emotionally and physically, by Venus, that it has led him to neglect his duties and his true warrior-like nature.  He deeply snoozes while his martial tools are used as play things by the naughty satyrs (who are themselves linked with the sinister activities of the Bacchanal).  This might be emphasised by the fact that the scene 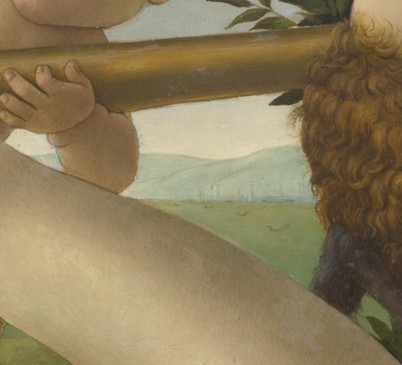 is set in a dense thicket, while we see a city in the background, perhaps where the Mars figure should be, attending his duties.  The tree Mars leans against is also noticeably stunted, with its branches chopped off, with rotten stumps in their place (I would not encourage my readers to interpret this too literally), suggesting a state of ill-health, or lack of attention to good care.  The painting thus both acts as a warning to its males viewers, and as an expression of male anxiety in the face of female sexuality and power.  Far from a calming and benevolent bringer of peace, this Venus is depicted as, be it through evil design or not, depriving Mars of his ‘manly’ power and sense of responsibility.

This interpretation of the painting is supported by the fact that that other famous Renaissance figure, Machiavelli, was complaining of Florence’s lack of martial prowess in just such terms.  He saw it as a deep flaw the Florence was heavily reliant on mercenaries for its self-defence, and complained that Florentine men were no longer capable soldiers.  This he blamed in part on their being too interested in sex, and too easily drawn away, by women, from martial concerns.  He campaigned for and eventually succeeded in setting up a Florentine militia in an attempt to solve this problem (whether he succeeded in drawing men’s attention away from women is both uncertain, and quite certain).

Artworks in the Italian Renaissance home often served as conversation pieces 0 they were there to be talked about, not just to be looked at.  So although we may be drawn to one particularly interpretation, it is likely that the painting was valued in part for tis potential for debate and discussion, and its multiple possible interpretations.  We must also remember that it was not necessarily the artist alone who had a say in the content of the painting – the patron might also suggest elements, wither on a broad scale, or down to minor details.

The technique of the painting mixes ‘new’ and ‘old’ styles and methods.  While he makes use newer techniques such as aerial perspective and foreshortening (particularly well-executed on Mars’s head), he also makes use of more old-fashioned methods.  The figures are all outlined in think black lines, a traditional Florentine technique.  This perhaps helps to give the paintings its pleasing sense of clarity.  The fine folds of Venus’ robes are wonderful, and the use of think brushstrokes is effective in achieving a sense of translucency, particularly noticeable on her lower leg, and clearly designed to highlight her idealised figure.  This is an effect particularly associated with tempera painting.  Tempera is made by mixing dry pigments with, usually, egg-yolk.  The fine wispy curls of the satrys’ fur where it meets their bald upper bodies also demonstrates this translucent quality.  Botticelli has also tipped his head to modern practice by including naturalistic images of real plants, with a variety of small plants growing in the grass on which the figures recline.

So I am glad that I was given the opportunity to take a fresh look at this painting, and reach a new appreciation of it.  It is always interesting to look back a familiar material through a new lens, in my case that of considering the gendered implications of such a painting.  I hope this post has served to both draw your attention to this fascinating painting, and to spur you to take a new look at an artwork you may have thought you were bored of, but might find much more to interest you in. As ever with artworks, the more you look, the more you find.

The National Gallery’s online entry on the work can be found here.

Is there an artwork or artist you would like me to write about next?  Let me know in the comments.  Feedback is always appreciated.